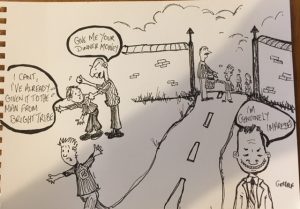 The recent Panorama exposé of Bright Tribe academy chain should come as no surprise. It’s the latest in a catalogue of failure, greed, and dodgy dealings by academy chains around the country. On top of mounting evidence of academy promoters and leaders lining their own pockets, it is increasingly clear that academisation is failing to improve standards as we were promised.

This scandal is the inevitable outcome of the privatisation of our schools and their removal from local democratic control and accountability. When schools were run by local authorities, they had to account for every penny. Now, academy chains are allowed to keep their finances secret. It’s only through diligent investigative journalism, by the BBC Panorama team and others, that we have learned about the sky-high salaries, kick-backs and financial deception in the private organisations running our Schools.

Our Conservative MP, Guy Opperman, and Wayne Daley, the man in charge of education at Tory controlled Northumberland County Council, knew money had gone missing when Bright Tribe walked away from Haydon Bridge High School almost a year ago. Mr Daley has belatedly called on the Department of Education to recover the £1 million Bright Tribe pocketed before abandoning Haydon Bridge and other northern schools. But our Tory MP, the man who never misses an opportunity to blow his own trumpet, seems to have gone uncharacteristically quiet. He was an enthusiastic cheer-leader for Bright Tribe, saying: “I have met with the leaders of Bright Tribe and I have been genuinely impressed.” Will he now admit that they pulled the wool over his eyes?

The Tory Academies Minister Lord Agnew said lamely, “there will be bad apples in any system” and that while sorting out Whitehaven Academy (Panorama’s main subject) was his priority it was “very challenging given its remoteness”. Well, Lord Agnew, Cumbria and Northumberland are not remote for those of us who live here – and we expect the same good schools as anywhere else in the country.

The next Labour Government will end the scandal of the privatisation of our schools by creating a National Education Service which will ensure high standards across the country and return schools to local control, so parents and communities can hold them properly to account. In the meantime, Labour are calling for the Government to set up an urgent and independent inquiry into how multi-academy trusts are regulated.