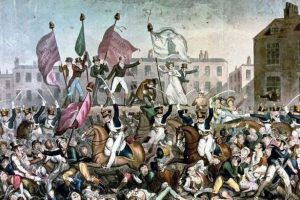 Peterloo: 15 people died at St Peter’s Field, Manchester when cavalry charged into a crowd of 60,000 to 80,000 who had gathered to demand the right to vote.

John  Hill reminds us that:

The fight for all UK citizens to have the right to vote has been a long one, from the Levellers, to Peterloo, to the Reform Acts of the 19th Century.  In 1918 all men over 21 were finally given the vote.  Women over 30 were given the vote in 1918 but they were not granted equal voting rights with men until 1928.  The voting age was reduced to 18 in 1970.

Don’t take your vote for granted. We need to use what has been hard won.

In order to vote you must first be registered to vote.

If you do not wish to register online, or are not sure whether you are registered to vote or not, you can contact your local Electoral Registration Office at:

Once you are registered to vote you need to make sure you use your vote. There are three ways to vote at an election.

At a polling station

To vote by post you need to complete an “Application to vote by post form” and return it to the Electoral Registration Office at County Hall (see address above).

The form can be obtained from a post-office or it can be downloaded and printed off.

A postal vote needs to reach the electoral registration office by 11 days before the poll.

If you’re unable to vote in person you can ask someone to vote on your behalf. This is called a proxy vote. You can only apply for a proxy vote under certain circumstances, including:

The person voting on your behalf needs to be a close relative.

Proxy vote forms can be downloaded at

A proxy vote needs to reach the electoral registration office by 11 days before the poll.