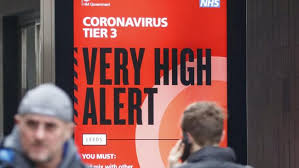 Do you remember when you were a kid, and you’d ask your Mam or Dad for something, and they’d say, “We’ll see” – which is parent speak for “No chance.” Or they’d say “We’ll see what Santa brings” which is code for “Hopefully you’ll have forgotten by then”.

As a child, next Christmas was always in the far distant future. Last Christmas was just a vague memory. As you get older, your perception of time changes. And since we went into the first lockdown last March, time seems to be behaving very strangely indeed. Normally, we structure our perception of time around events. Birthday parties and anniversaries. Kids off school. Getting away on holiday. Without these landmarks, we feel in a perpetual no-man’s land. Like we’re stuck in that limbo time between Christmas and New Year, where you have no idea what day it is, but you know it’s fine to eat chocolates for breakfast.

With the days running into each other, and no highlights to look forward to, it’s tempting to watch one of those 24 hour news channels. Even while you’re doing it, you know it’s a mistake – there’s just so much doom and gloom. Since I became a politician I’ve stopped watching rolling news – it’s too superficial. I imagine it’s what it must feel like when a meteorologist is asked “will it rain next weekend?” and is expected to give a “yes or no” answer. To get your attention, the media keep using the term ‘unprecedented’, particularly about Covid-19. I think we’ve worked out it’s unprecedented, we don’t need to be told.

The global media have had a field day with all the unprecedented events caused by the unprecedented President. The holder of the highest office on the planet was – let’s tell the truth here – a pathological liar. Who advocated white supremacy, sexually assaulting women, and injecting bleach into your lungs as a Covid treatment. His administration withdrew from the Paris climate agreement and let Covid run rampant. Not to mention the corruption, inciting violence and the fantasist claim that he’d won a landslide in the election. All unprecedented, but it’s noticeable how quickly people just came to adapt to it. Unprecedented can describe good news, too. Kamala Harris becoming the United States’ first female Vice President, the highest-ranking female elected official in U.S. history, and the first African American and South Asian American Vice President. I caught Joe Biden’s inauguration speech. He’s not a young man, and Kamala Harris might be the first woman president of the US.

For me, the highlight of that speech was undoubtedly Bernie Saunders’ unprecedented mittens, and all the memes they’ve spawned.

In times like this, it’s easy to lose perspective. Just as Trump’s abuse and lies were not robustly challenged by the US media, we’re seeing a numbing of UK news responses.

Last week, hundreds of thousands of police records were accidentally wiped from the police database.

Home Secretary Priti Patel was asked whether any of the data had been permanently lost. I was staggered when she answered to the effect, “Dunno mate.” And the Prime Minister couldn’t tell the House of Commons how many cases are affected by the lost data. In any previous era this would be a government defining story. Now it’s submerged in mix of speculation, guesswork and urban legend that passes for Britain’s public debate. No wonder people doubt the accuracy of information coming from the Government.

One positive unprecedented event was the speed of the vaccine development.

Originally Published in the Journal and Evening Chronicle 25.1.21