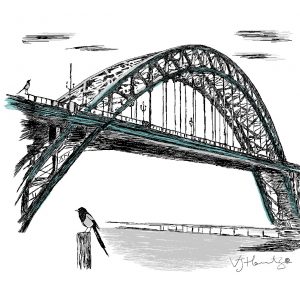 I was invited to be on Newsnight last Wednesday. As the Mayor representing England’s most northern city and towns, they wanted my take on levelling up. I was all set to walk over to the BBC studios in Newcastle, when I got a message from the producer. Rather than me join the discussion by live feed, they would just have a discussion with studio guests. So the discussion on levelling up the regions of England would be limited to people based in London. Oh the irony.

Whatever this budget was, it wasn’t levelling up. A couple of weeks ago the Marmot report showed life expectancy in the North East is going backwards for the poorest women.  England has differences of 19 years in lifespan between the richest and poorest areas. Citizens in London and the South East have two and a half times the average personal wealth than citizens in the North. The gap is getting wider year on year.

The government missed a trick in this budget. They missed a massive open goal. On the back of an 80-seat majority, Boris Johnson could have redefined British democracy.

The centre of Newcastle is dominated by a 130-foot high monument to Earl Charles Grey. For me it defines Britishness – inventing a new way to drink tea, and slowly edging towards democracy. Earl Grey’s 1832 Great Reform Act did away with the Rotten Boroughs. Over 80 years later, in 1918, 8 million women gained the vote, and the abolition of property qualifications enfranchised 5 million more men. Another 80 years on, in 1998, we saw devolution granted to Scotland, Wales and Northern Ireland, and shortly afterwards, London.

Will we have to wait another 80 years for the North East to gain the right to control its own destiny?

Until we get the chance to control our own transport system and housing policies, we’ll always be left behind the big money that flows into London. Our brightest and most ambitious will be tempted to advance their careers in the expensive and overheated economy of the South East.

To get technical for a moment, one of the biggest problems is the Treasury Green Book. In a nutshell, you have to prove value for money to justify public investment. Quite right too.  But the Green Book defines value for money as economic growth. It skews investment towards areas that are already rich. It means Treasury won’t invest £180 million extending the Tyne & Wear Metro, because house prices would increase more from investing £18 billion in London’s Crossrail. It creates a vicious circle of disinvestment in the North East, and we’ve suffered for decades.  The sooner it’s changed, the better.

One thing that did come out of the budget is a £4.2 billion transport fund for Mayoral Combined Authorities over the next five years. Divided up per person, that’s over £100 million a year for the North East (excluding Tees Valley).  We can make a real difference with that – better rail, better buses, better support for sustainable & healthy transport.

As usual, though, there’s a catch. The budget specified that all of Tyne & Wear has to unite and have a Mayor. Of course there are benefits to being united. It makes us far more likely to get the replacement to the European funding, known as the Shared Prosperity Fund. But what does it mean for our existing North of Tyne investment budget? If we’re going to double our population, we should get double the budget.  Otherwise, it’s not levelling up.

I’ll be asking all these questions, and more, of government ministers in the coming weeks. And as usual, I’ll keep you, the people, in the loop.

If a climate activist eats meat, all their views are invalid. If they’re vegetarian, they should be vegan. If they’re vegan, they’re not allowed to eat avocados. If they somehow survive on moss and rainwater, they’re uncooperative crusties in hemp-smelling bivouacs.

It’s a favoured tactic of the right. Play the man, not the ball. Distract people from the real issue. Make everyone think that climate responsibility is a matter of consumer choice.

If you had the choice between veg flown in from overseas, and locally grown veg at the same price, I bet you’d choose the local food.  But that’s not the choice. And there is not much you, as an individual, can do about it.

Most people would choose a greener commute.  But what if public transport costs more money and takes you 3 times as long?  That’s not much of a choice either.

The change needed is much bigger than the individual.

That’s why Extinction Rebellion oppose the extension of the Bradley opencast mine in County Durham. And why we must continue to campaign against coal mines at Dewley Hill in Newcastle and at Druridge Bay in Northumberland.

The owners claim the coal isn’t for energy generation. But there’s no guarantee of that.  It’s claimed the coal will be used for coking coal to make steel. One early lobbying piece I saw said the coal is for fuelling heritage steam railways. Yeah, right.

Those who remember their GCSE science will know that iron ore is a compound of iron and oxygen.  Coal is heated to produce coke, which is mixed with hot iron ore.  The carbon monoxide from the coke joins with the oxygen in a reaction known as reduction. The product is molten iron, and a massive discharge of carbon dioxide. Thing is, hydrogen works just as well. The discharge is a compound of hydrogen and oxygen, known as water.

Sweden, rich in hydro-electricity and poor in coal, has developed  this technology. It’s catching on around the world. I’m trying to attract a company to the North of Tyne with a green steel recycling furnace.  At the moment, it’s more expensive, because it hasn’t reached the economies of scale or had the £billions in investment.

But once you account for the climate damage done, the fossil fuel method costs the Earth.

The basic principle of tort in law is that if someone does you harm, you can sue them. Fossil fuel extraction will flood our low lying cities, burn tropical forests, and slash crop yields.  It will wreck our global economy.  All by pumping megatons of CO2 into the air. If we accept the principle of making the polluter pay, the price is so prohibitive that extraction has to be stopped. Governments need to remove all tax breaks for investment in fossil fuels, including via pensions.

The answer to the economic, climate and inequality problems is the Green New Deal. There are jobs in solar, offshore wind, timber construction, sustainable transport, agro-forestry and a multitude of other sectors. Let’s make them all unionised, well paid jobs with work-life balance, while we’re on. Give our kids a real future.

Once there’s a few hundred billions of share capital looking for a home, R&D will get all the funding it needs.  Technologies that have been underdeveloped for decades will be market ready in just a few years.

We’d  see the climate solutions reach the market metaphorically overnight.  Instead of obsessing about charging points for electric cars, let’s fund integrated public transport.  Owning and running a car costs £4600 a year, on average. We can afford a damn-near perfect public transport system for that. We don’t even have to raise taxes. Just change our financial system.  Ending the unregulated free market would unleash entrepreneurship and innovation.

Individual responsibility is to be encouraged and praised but it’s only the tip of the iceberg.  The youth climate strikers have the right idea – system change not climate change!

The Life of Brian is a masterclass of irreverent comedy genius. Directed by Terry Jones, who met with the big boot of destiny last week and joined the choir invisible.

It’s often described as a religious parody, but it’s so much more.  At its best, satire pricks the bubble of our thinking, and challenges what we take for granted.

I heard about his death just after I’d spoken at The State of the North event in Newcastle.

I opened my speech with a question. “Who thinks that carrying on as usual with our current economic model will lead to economic and environmental catastrophe?” More than half the audience put up their hands.

“And who here thinks that there are alternative ways of doing things?” I asked next. Almost everyone’s hand went up. This was an informed audience, business leaders, policy makers, academics.

We face a climate crisis. An inequality gap. And a democratic deficit. The CBI agree, trade unions agree, and Mayors, both Labour and Tory, agree.

We’ve had 20 years of the Scottish Parliament, the Welsh Assembly, and the Greater London Authority.

And we’ve now had a few years of the Mayoral Combined Authorities with  9 ‘Metro Mayors’ in the UK.  The 5 in the North are Greater Manchester, Liverpool City Region, Tees Valley, Sheffield City Region, and, this past year, the North of Tyne.

So what has Whitehall ever done for us?

Serious devolution of real power has yet to take place.

Take one example from IPPR’s State of the North report:

95% of all the tax raised in North last year went to central government in Westminster.

Only 5% stayed in the North through Council Tax.

IPPR shows that in the last decade the North got a £3.6 billion cut in public spending.  The South East and the South West saw a combined increase of £4.7 billion.

It hasn’t taken the Tories long to revert to form. Despite winning seats in the North East, the imminent local government settlement will take an extra £50m a year from councils in our region.  Surrey and Hertfordshire are getting a £50 million boost, though, so that’s alright.

And despite paying the same rate of income tax and fuel duty as everyone else in England, we’ll have to make up these shortfalls in our council taxes. Or else fail to provide adult social care.

This hoarding of resources makes a practical difference on the ground. London received almost three times as much in transport spending per person as we did in the North.

I’m a massive advocate of public transport. I’m over the moon that we’re finally getting our new Metro trains funded. But why has it taken four years for the government to sign this off?  If these budgets were devolved, we would have them in service now.

We need to devolve the money to the place where the decisions on how to spend it can best be made.

We’ve had Quangos and LEPs and RDAs and funding agencies for transport and housing and… the list goes on.

After all – that’s the basis of democracy. You stand on a manifesto and let the people decide.

That means new powers in the hands of elected Metro Mayors.

Mayors need the authority to make a difference.  If they just get the accountability side of the coin then this will corrode public trust in the model.

And before you know it, the public’s faith in devolution will be destroyed.

I know that my fellow Northern Mayors agree with me. We’re meeting with the Chancellor, and trying to influence the budget. Only with devolution to people accountable to Northern voters can we Power Up The North.

Because if anyone thinks Boris Johnson will be some kind of saviour from Westminster, well, as Terry Jones said, “He’s not the Messiah, he’s a very naughty boy!”