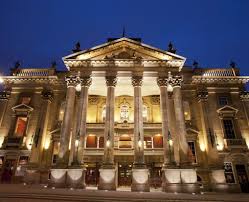 Culture is the sum total of how we express ourselves as humans.  Culture is our collective soul.

For some it’s theatre, museums, art galleries, opera.  For others, a live music gig, a beer festival or a home game.

I don’t see culture as a “sector”, an opportunity for economic growth.  We can live in concrete blocks and eat nutrient paste to sustain our bodies.  But we need architecture and cuisine to sustain our souls.  Enriching our lives is an end in itself.

In the North East, we’ve got wealth of theatres, exhibition spaces and venues. This month you could have expected to see The Mousetrap at the Theatre Royal. Listened to an amazing range of music styles at the Sage. Attended the Viking exhibition at the Bailiffgate in Alnwick. Delved into the Tynemouth market at the weekend. There would have been football at St James’s and even (whisper it…) at the Stadium of Light. None of this happened. We don’t know when they will reopen, or if they will ever return to the way it was before the virus struck.

We do know that people working in culture are poorly paid. For every Premiership footballer, Hollywood star or best selling author, there are thousands who live hand to mouth.

So, what is going to happen?

Real cultural diversity comes from the interchange of ideas, experiences and influences. We should develop our local culture, rather than thinking that everyone wants generic, cookie-cutter events.

I hope I’m not coming over too Royston Vasey – ‘this is local festival for local people…’. But look at the difference the Edinburgh Festival and the Fringe have made to that city. All the performers who’ve honed their skills and got their break there. Or the Whitby Goth Weekend, which celebrates a sub-culture that connects people, and supports the local economy.

A week-long festival, or even a single day event, can be all year in the planning. The Great North Run employs a full-time team year round. These are meaningful jobs with a great sense of purpose.

Speaking of Royston Vasey, The League of Gentlemen has been dropped by Netflix. There’s been a rush by broadcasters and streaming services to distance themselves from anything that smacks of racism, or cultural appropriation. Quite right too. But blanket bans miss the point. The League of Gentlemen was never meant to be a cosy, family sitcom, like Terry and June, or My Family. It was deliberately intended to be dark – to shock and offend – as well as being clever and funny.

It’s a delicate balance. We have to avoid propagating bigoted views. But there’s still a place for the sort of humour that makes you wince at the same time as laughing. Good art should challenge our perceptions of the world.

Would we ban The Merchant of Venice because of the sixteenth century anti-Semitic sentiments? Would we ban the Old Testament for its homophobia? Should we edit Mein Kampf to make it less offensive? Airbrushing history is to pretend that the world never thought like that. A better alternative is to explain why it’s offensive. We should not dodge these uncomfortable debates around racism, we should win them.

HBO has temporarily taken down Gone With The Wind. For a story set on a cotton plantation, it’s effectively blind to the slavery and racial oppression. Hattie McDaniel, who played Mammy, was the first African-American to win an Oscar. Yet she was not allowed to sit with her fellow stars at the Oscars ceremony, because of the segregation at the time. HBO said, ” it will return with a discussion of its historical context and a denouncement of those depictions, but will be presented as it was originally created, because to do otherwise would be the same as claiming these prejudices never existed.”

Back to Royston Vasey, (local funding for local people…). My Cabinet and I have allocated £8.4m for our culture and events strategy. We’ll need to revisit it post-COVID. With people flying less, domestic tourism will increase. One component is to bring major events, like the Rugby Magic Weekend, to St James’ Park. A key plank is developing home-grown festivals, to showcase local talent, local people, and local small businesses. Rooting in the landscape, history and culture of our region creates a virtuous circle. It creates an ecosystem for our cultural sector. It gives people a chance to develop their careers here, in our region. It keeps money in our local economy. And best of all, with a profusion of great events – food, literary, music, sport, community – the lot – it will make this a better, more fun place to live.

Originally published in the Journal and Evening Chronicle 15.6.20