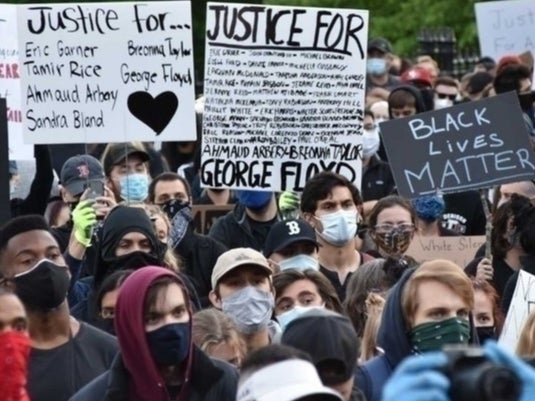 It is very encouraging to see the overwhelming response to the brutal murder of George Floyd.

Quite rightly, people demand such killings by agents of the state must stop. However, I am

as a kind of displacement activity to avoid confronting the racism, sexism and other forms of

oppression right in front of us in our everyday lives.

making racist comments. One very concrete thing we can all do against racism is not vote for

are all complicit in an institutionalised system of exploitation, which requires these ubiquitous acts

of violent oppression to maintain the many layers of privilege which sustain it? Political leaders talk

of “bad apples” as a way of isolating and belittling the problem, to divert attention from the reality

that the whole damned barrel of apples is rotten.

dispossession, enslavement and genocidal slaughter of countless millions of humans over the past

four centuries or so. How many people who decry institutional racism in the USA also glorify and

monarchy? How many turn a blind eye, or are ignorant of the monstrous crimes against humanity

perpetrated by our own country? We comfort ourselves that the government-sanctioned piracy of

the East India company, the slave-trade and opium-trade profits that built the beautiful cityscapes of

London, Bristol, Liverpool, are all in the past.

glorified in our obsequious deference to royalty, wealth and privilege – are still with us, and even

more powerful and genteely murderous. Their descendants who inherited that ill-gotten wealth

now own the banks, the financial institutions, the multinational corporations, as well as large chunks

of real estate in this country and around the world. Their wealth has been built on an ideology of

birthright) and taking by force the land of other peoples across half the globe. They are inferior to

us, so the ideology says. Their relative poverty and “primitive” cultures are evidence of their

inferiority. It is the white man’s destiny to take the land and natural resources from them, because

we as the superior race and culture will make better use of them, so the justification has always

run. Nowadays, of course, it is not expressed so baldly. It is dressed up in with other justifications

and spin, but the inherent disregard, disdain and sense of entitlement over others less fortunate is

still at the root of it.

It’s that ideology which fuels racism. The policeman with his knee on the neck of the black man is

not the cause of the ideology of racism, he is simply a foot soldier, a follower. He could even be

seen as a victim of the ideology, having been indoctrinated with the ideology of racism in a culture

and economic system which tells him that although he may be low in the pecking order, at least he

is above the black man. He can vent his frustration and hate with impunity on those he has been

taught are even more lowly than he. Of course it is right that he is held to account. But the culture,

economic and political system – and those at the top of it must be held to account too. Until they

are held to account nothing will change, because to them, white police officers are almost as

endemic in our economy and our political system. We ignore the vindictive and punitive welfare

system which drives poor and disabled people into poverty, homelessness and even starvation in

Britian – one of the wealthiest countries in the world. We ignore the extermination of indigenous

peoples in mining and logging operations. We ignore the Bangladeshi women who make our

clothes, locked inside death-trap sweat-shop factories. We ignore the effective enslavement of

millions of workers around the world who work for poverty wages in insecure work, with no

rights to challenge their employment conditions. We ignore the plight of Middle Eastern, Asian and

wars by so-called allies such as Saudi Arabia. And now the government is trying to ignore the fact

that BAME people are much more likely to die in the current COVID19 panedemic.

Until we challenge the whole structure of privilege, dehumanisation and oppression which is

inherent in our current political and economic system, there will be no change and many more

poor and oppressed people will die.